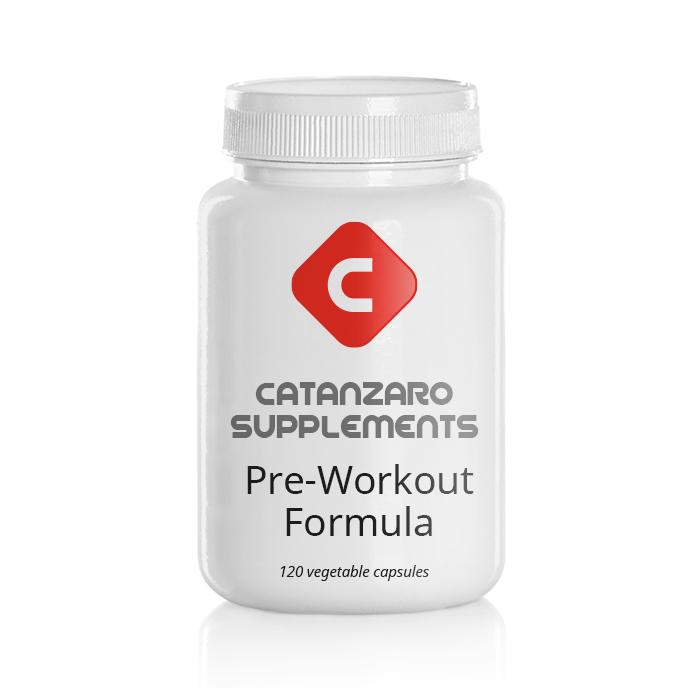 Suggested Use: Take 2 capsules daily or as directed.

Catanzaro Supplements Pre-Workout Formula is a comprehensive formula to use before training or competition to improve energy, mood, and mental focus. This innovative formula is designed to boost physical performance through several mechanisms. It consists of various advanced ingredients, including Acetyl-L-Carnitine, N-Acetyl-L-Tyrosine, Caffeine, DMAE (Dimethylaminoethanol), Pyridoxal-5-Phosphate, 5-Methyltetrahydrofolate, and Vitamin B12 (Methylcobalamin).

Acetyl-L-Carnitine (ALC) is more readily absorbed than L-carnitine and can increase exercise performance (speed, strength, and endurance), provide nutrient partitioning properties to build muscle and burn body fat, and act as a potent antioxidant to improve recovery. Studies have shown that ALC can increase energy levels, reduce obesity, improve nitrogen utilization, decrease muscle soreness, decrease pyruvate and lactate concentrations, and increase the utilization of fat as a fuel source during exercise. ALC also supports cognitive function and plays a strong role in the brain by increasing acetylcholine and dopamine production, improving memory, concentration, and learning capacities, and protects the brain from stress and deterioration. In addition, ALC has shown to have anabolic properties and can increase testosterone levels as well as modulate cortisol levels during physical stress.

N-Acetyl-L-Tyrosine is more rapidly absorbed and more water-soluble than tyrosine itself, making it more bioavailable to the body and less prone to urinary excretion. It is converted to tyrosine, which is then converted to key neurotransmitters including epinephrine and dopamine, thyroid hormone thyroxine, and melanins, the pigments largely responsible for skin and hair color. Since this form of tyrosine is absorbed so much better, smaller quantities are therefore required to reach therapeutic dosages.

Caffeine stimulates the central nervous system promoting greater concentration, mental awareness, and quicker reactions. It makes you feel alert, pumps adrenaline (the “fight or flight” hormone) to give you energy, and increases the production of the neurotransmitter dopamine to make you feel good. In addition to various psychological and physiological benefits, caffeine can improve athletic performance. Research shows that caffeine is an effective ergogenic aid for endurance exercise by delaying fatigue and increasing time to exhaustion, and recent evidence indicates that caffeine augments strength and power performance through several mechanisms. Taking caffeine before you train will cause the body to burn more fat during your workout.

DMAE (Dimethylaminoethanol) has been associated with enhanced brain and muscle function. As a precursor to the neurotransmitter acetylcholine, DMAE can improve focus, drive, concentration, and mental alertness. Since greater concentration may lead to better exercise form, the risk of injury is potentially reduced with the use of DMAE before training. Also, DMAE appears to possess a mild stimulating “wake up” effect on the brain and may help to improve mood, well-being, and energy levels. Combined with other pre-workout supplements, DMAE has been shown to improve physical performance during exercise. Furthermore, DMAE is known to strengthen cell membranes, which may improve muscle tone and help promote taut skin, thereby reducing the appearance of fine wrinkles.

Pyridoxal-5-Phosphate (the active form of vitamin B6) is associated with numerous enzymes, many of which are involved in the conversion of amino acids into the neurotransmitters dopamine, norepinephrine, and serotonin.

Vitamin B12 (Methylcobalamin) is involved in nucleic acid metabolism, cell division, and blood formation. It is required for the management of pernicious anemia. It is also necessary for myelin production in the nervous system. It can help with memory, depression, concentration, and energy. It reduces heart disease risk when combined with folic acid and vitamin B6 by decreasing homocysteine.